Welcome to our blog! Just scroll down to enjoy our students’ work and our teachers’ words!

One day there was a boy in the science laboratory of his school. In that room there were many dangerous medicines, products and animal bones. The reason why the boy was in there, is that he was looking for his pencil but, one of the bones suddenly moved.
He was really surprised, and he looked at the bone. Then, the bone started to fly and turned towards him. He ran away but the bone pierced him.

One day there was a girl riding on a train. There were no other people on that train.
At the next station a boy entered the train. He was flying (levitating) because he was a ghost. The girl got surprised of him. She was shocked and she died.

One day, there was a boy at school in the middle of the night. He forgot his notebook. He went upstairs to go to his classroom. On his way, suddenly the bell rang loudly. He was surprised. He kept running but he could not go out. He was locked in the school forever.

The Abandoned House
One rainy midnight, Sam, Ben and Emma went to an abandoned house because they were very curious. They were hearing footstep sounds in the house, so Ben got scared.
However, Sam and Emma were really excited. They kept walking up the stairs and then, into a room. They saw a person.
They went out of the room down the stairs then, they try to get out of the house, but they faced 3 people. They screamed. One man said “we are people! we smoke cigarette here because we are not allowed to smoke, we are too young. Please do not tell anyone!”. Sam said, “Oh umm ok!”. The man said, “we are in the room smoking then”. Emma said “What?! Who is in the room next door?”, but then the door closed…

One day, there was a boy in a church. That church was dark and cold. He stayed there for about thirty minutes. After that, he noticed that Jesus Christ moved so, he felt scared and he looked away. Finally, someone tapped his shoulder so, he turned his head around and there was a standing Jesus. Jesus had a big knife.
The next day, people died in the church and Jesus returned to his place.

There was a young girl and her family. They were watching movies at home. Then, the young girl went to the bathroom and when she came back, her family was gone. After that, she searched all over the house. Suddenly, she heard her mother’s scream, so she ran where her mother was. And then, she found her dad who had changed into a terrifying zombie, so she scared stiff. After a year, the dead young girl and her mother were found by the police.

A young woman was riding on the bus alone, but a wicked man entered the bus. The man was running to the young woman, so she scared stiff. The man hit the woman’s head, so she fainted. She woke up but she could not move because the man and the bus driver were creepily eating her.

On a hot night during a full moon, there was a female young teacher in a school. Her name was Mary, and she was walking to her classroom because she had left her wallet there. When she opened the door, she felt something spooky, but she could not tell what it was. Then, she saw the reflection of a disgusting man on the window, so she got scared stiff.

The day after, Mary’s students felt she was a little bit strange, but they could not tell what it was.

On October 31st, two sisters did trick or treat in town. At night, they were tired, so they went to the park to take a rest. Then, they started to play hide and seek. The older sister counted the time, and the younger sister was hiding somewhere. She finished counting the time and started to look for her sister. After 10 minutes, she could not find her sister. She got scared, cried, and went back home. Then she found her sister sleeping in front of their house. Soon, she woke up, but she did not remember how she came back home.

A girl was hungry, so she went to the kitchen and looked for something to eat, but there she could not understand the words. Then, she found some sugar. She remembered when her mother ate it before, so she tried to eat that sugar. She would be very happy and fine.

The happy girl started to walk out, then she found a big worm that suddenly moved to the girl. She ran hard back home, and she got tired, so she slept.

After 30 minutes, her mother came back home and found the sugar pot, then she looked for her daughter because the girl thought it was sugar, but it was drug. The girl was lying down in the living room and she was dead.

Two boys were born in the same hospital but of them died soon. Later, the other boy died too. A nurse, working in that hospital, said “I think the first boy brought the second boy because he was alone. Sometimes, such sad things happen in the hospital”.

From that day, many people sometimes heard the two boy’s laughing voice in the hospital.

In the forest, a man lost his way. He found a big castle by chance, but he felt fear. Therefore, he went in and walked around and suddenly a cup started to move. And then, all the furniture started to do that too. He heard someone’s moaning voice, and he found a beast. It was to scary and he felt there was a disgusting atmosphere.

However, the beast was really strong, so the man was caged and monitored.

A few days later, his daughter just felt his father was in trouble, and she decided to go into the forest too. She found the beast too, but she cooked something delicious for him. Sadly, the beats ate them as a special dinner. 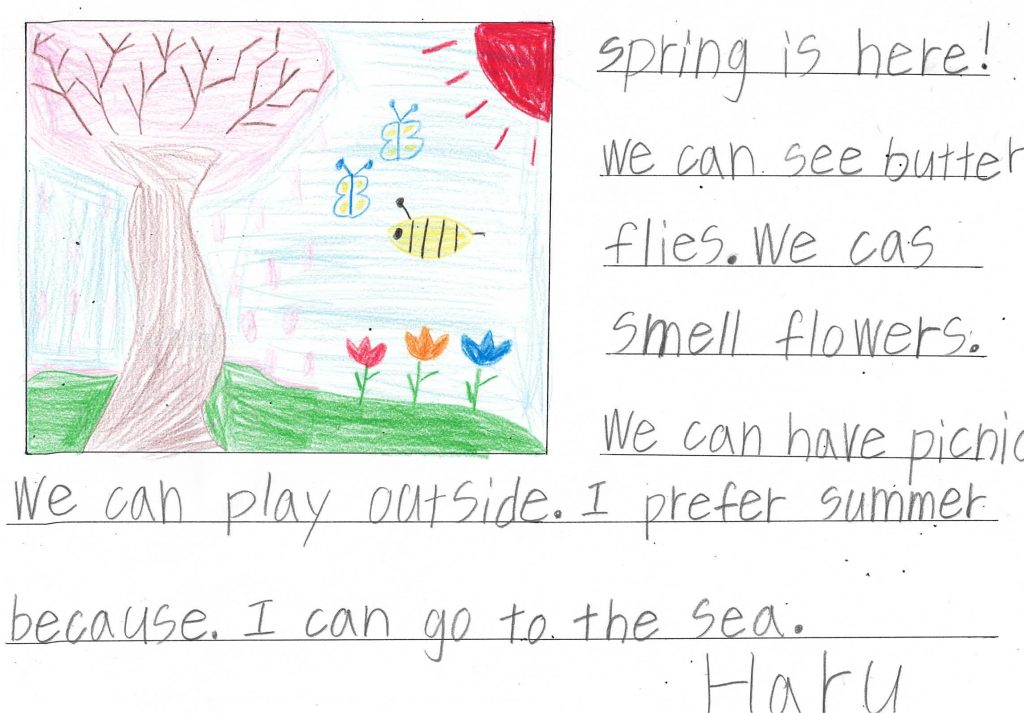 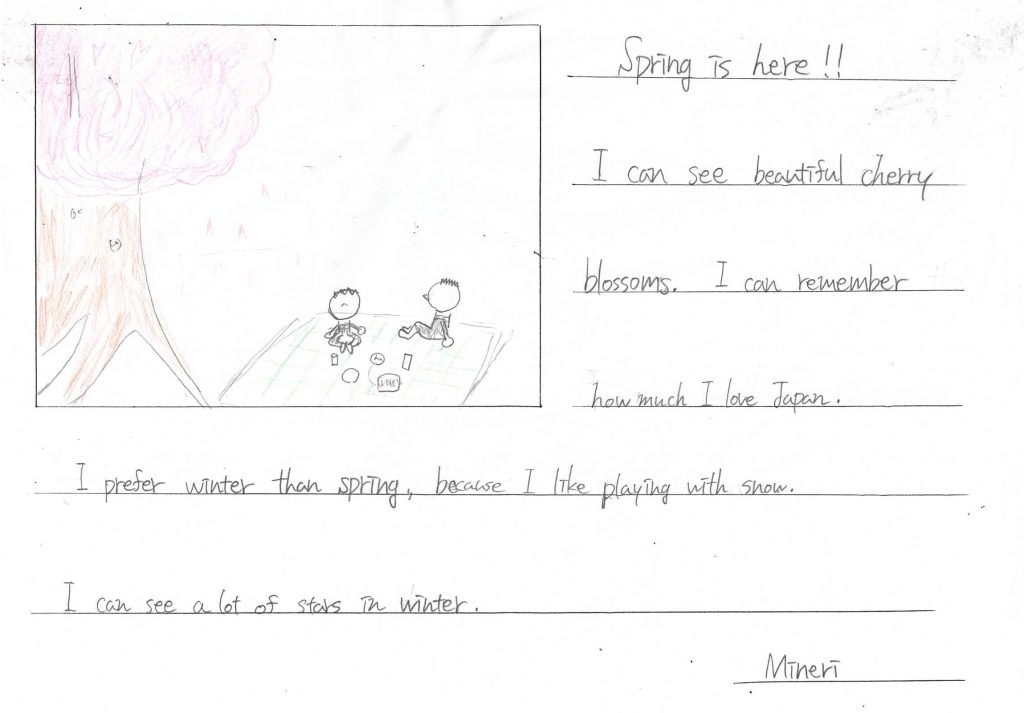 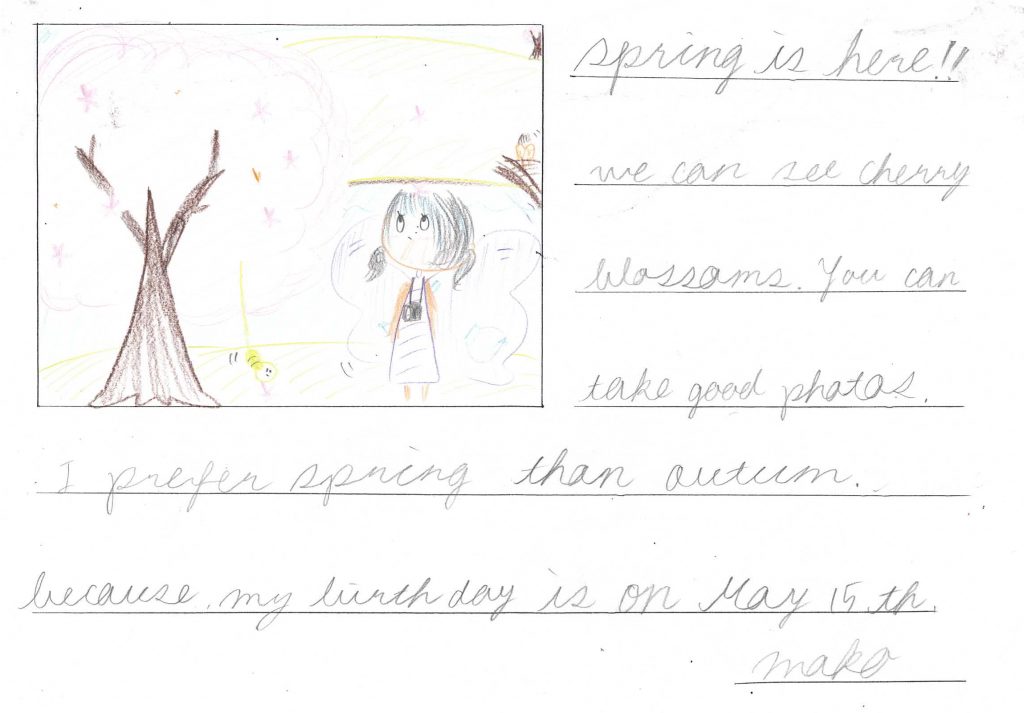 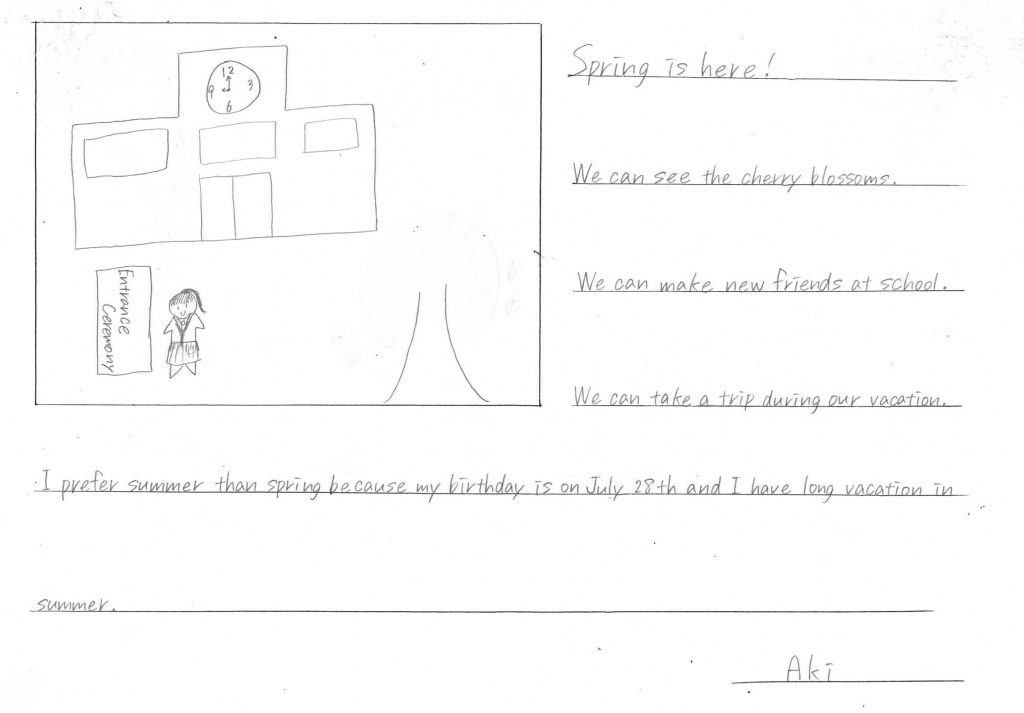 【Soft Tennis and Me】

“Soft tennis is from Japan and it became popular through Asia. It has similar rules with tennis.

The difference is that the ball is a soft rubber-ball comparing with the regular yellow tennis ball.

I think this sport is fun, but it is difficult because the ball is not easily bouncing.

People think soft tennis is just a sport, but we must use our head to play well!

I play in my school’s club and I usually play 5 days a week. My dream is to be a strong player.”